Posts from the “Events” Category 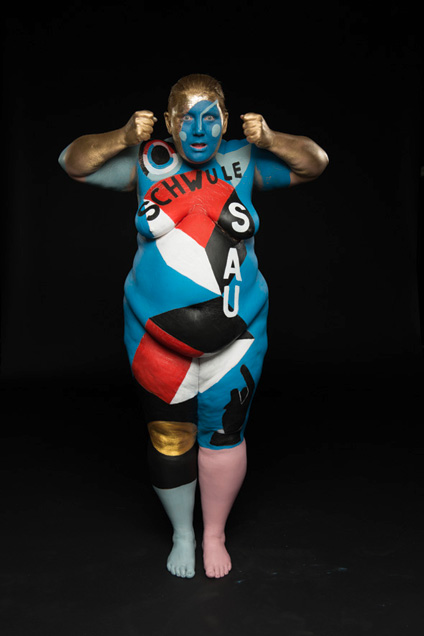 The number of people seeking asylum in Austria increases each year, yet little is known about these asylum seekers’ living conditions. Therefore brut Vienna has organized a three-day program, which will concentrate on the subject of ´Fleeing and Displacement` – it`s not for free, but come around and “Pay what you can”.
There`s for example the performance DANEBEN. Performed for the first time three years ago on the brut stage, the artists Michikazu Matsune and David Subal will search for the asylum seekers they portraied back then, in May 2013 again: Where are they now, and what have they experienced in the meantime?
Fleeing and displacement in the arts are the topic of The Verschlusssache event series, which include lectures, and a panel discussion. There`ll also be film screenings and a party to conclude the project.

It`s time of the VIENNA GALLERY WEEKEND: Starting tomorrow May 3-5, 2013) you shouldn`t miss the occasion to see contemporary art all over the city and in Vienna`s most fancy galleries – for free! In case you don`t know where to go, I´ve assembled some favourites of this three-day event! More after the click.

In the frame of the lecture series Parallax Views on Architecture at Academy of Fine Arts Vienna Andreas Spiegl (lecturer on Media Studies at the Institute of Cultural Studies at the Academy of Fine Arts Vienna) will give a lecture titled The rehousing of “architecture unhoused”:
“Recent politics of space have led to a notion of space beyond the dialectics of inside and outside. Architecturally turned into one another the paradigmatic motif of that relation between inside and outside, the house, seemed to have gone. Leaving a house dissolved into a blurred perspective of contradicting views. Seemingly the spatial opposition of inside and outside turned into a parallel notion of in and out. The outside is not behind the inside anymore but next to it, maybe identical. The house that has been architecturally “unhoused”, appears to come back on the basis of a discourse on sustainability, another version of functionalism. The so called research on the conditions of architecture seems to search for the house again, to rehouse mechanisms of in and out, of inclusion and exclusion, based on the ancient “oikos” and its derived economy. Interestingly the inside tends to incorporate everything into the economical house and to create an outside, an uneconomical rest, a building of emptiness. Uncannily empty, an unhomely home, where the Social Media and virtual spaces moved in. ” (-Press release)

In the frame of the lecture series Gender Politics and The Art World at University of Applied Arts Vienna, Alexandra Schwartz, who is the first Curator of Contemporary Art at the Montclair Art Museum, will give a lecture titled “MoMA’s Modern Women’s Project, Feminism, and Curatorial Practice“:

“In spring 2010, MoMA New York published Modern Women: Women Artists at The Museum of Modern Art, a 500-page, 50-author book. Its publication was celebrated with more than a dozen permanent exhibitions over 2010 to 2011, as well as an international symposium. The book was the culmination of a five-year study of the Museum’s holdings of work by women artists, led by a committee of representatives from each of the Museum’s curatorial departments. The Modern Women’s Project, as the larger initiative was known, represented the first time MoMA, or any major American museum, had conducted a comprehensive study of its collection through the lens of gender.

This lecture will focus on that period of transition, during which the Modern Women’s Project went from an under-the-radar research initiative to a major Museum event; as well as the changes, both within and outside MoMA, that it wrought. The Modern Women’s Project led to a number of “firsts” at MoMA, from “The Feminist Future” symposium selling out in record time, to the first time the Photography galleries were installed with only women artists.” ( – Press release)